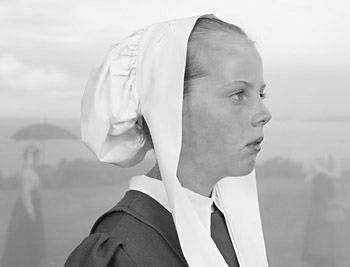 While finishing the Wilder Mann series, I’ve decided to work on a second project connected to Folklorism. Brittany is right next to Normandy, where I live. I decided to try to assume what folklorism is and to somehow work on it on a very traditional way… like if pushing it as much precise and conventional could be finally a way to really twist it fundamentally. These costumes from Bretagne, and mainly the caps made of lace remind me the hairdressing of some actresses in the films of Hitchcock… hair perfectly dressed, giving the sensation of a this strictness telling me that the folklore in Brittany is something deep and serious. I wish it to be my project until the end of the summer 2012 for a book and an exhibition.