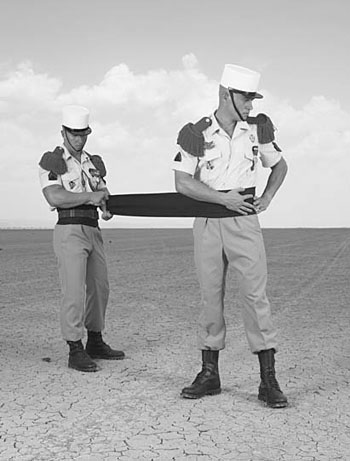 There’s always the choice to seek new territories. But from my point of view, to be able to walk a step forward, it’s sometime necessary to visit again the space I’ve occupied. The French Foreign Legion has been for my research a real place of experimentation, showing almost every step of my photographic evolution.I worked there in 2000-2001, to produce my third book “Legionnaires”. This was a very frontal project. Two big series of portraits of legionnaires. In 2006, I decided to jump there again to bring the Foreign Legion in my Empire book. And last week, I spent my time with the legionnaires in Djibouti, Africa: A very intense program. I photographed 4 groups of legionnaires in parade uniform in some very rich landscape/background (salt desert, sand desert, vulcanic desert, sand beach). It was the last chance to photograph this regiment in Djibouti. They’ll move soon. And the territory is connected to the mythology of the foreign legion. This series was done for a research title “Outremer” connecting Foreign legion and French Navy: A project about exotism and mythology connected to our French military history. And historically speaking, this will be the last series of portraits of legionnaires made in Djibouti, since the regiment will move in June.