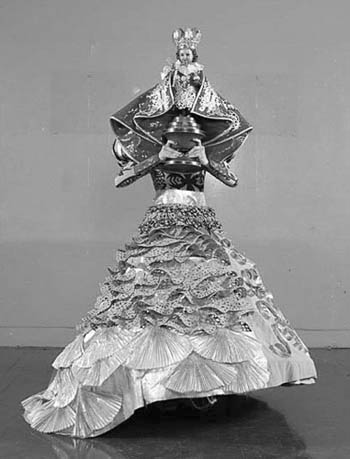 A short trip to Philippine Island, commissioned by the French Ambassy in Manilla for a project brilliantly curated by Francois Cheval, Director of the Photo Museum of Chalon sur Saone. I decided to work with the Queens of the Sinulog of Cebu Island. This is probably what attracted me with the Philippines: This mix of christian and pagan.The tradition of the Sinulog is a mix of a latin carnival and a religious procession. The queens of the Sinulog hold that sculpture representing the “Santo Nino de Cebu”. I did this project right after a trip for the Wilder Mann project, in Romania. The influence of the Wilder Mann, as much as the one of my fashion series, is absolutly obvious. I jumped over the traditional image of the Queens to get on something once again sculptural. Next year, I’ll work again in Philippines, for another project.