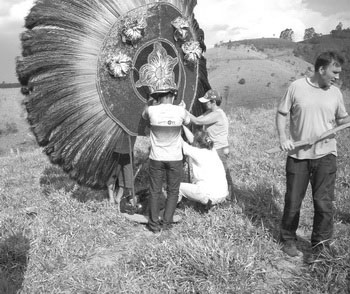 Invited by Marcus Togni, president of the “ligua das escolas de samba”, I´ve been working since monday in the Saci-pô, samba school. I decided to focus my attention on the particular phenomenon of the fantasias (in particularm the ‘destaques’ which are usually the enormous costumes you can see on the trucks during the carnival in january). Poços de Caldas is somehow famous thanks to these amazing fantasias, no limit costumes with a big touch of kitch and surrealism: Designing a fantasia needs a strong instinct and not much concept. After this series of portraits of members of the samba school in these fantasias, I will start to design my own fantasia which will be produced before january by the workshop of the school. Following the Vis voluntatis project with the purple guards and the Bi yan series with the Chinese Opera, my fantasias will be the third chapter of this vis voluntatis project… I can tell in advance that my fantasia will be also in purple, black, yellow and white, with the medusa as the main character… vis voluntatis, eo solus intra circulum.