I’m not in China now 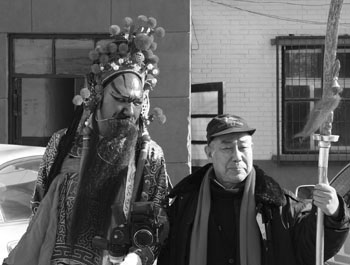 But I’m working on my “Bi Yan” project. I did not expect this to be so complex. The “Bi Yan” series is about the wish to be inside a group, and more than that: to be able to use the codes and the fundamental language of a group, by exploring it, by twisting it. But it’s not a piece of cake. I started to work with the Chinese opera makeup artists in November, and now, I’m creating my own character for an hypothetic Chinese Opera. His name is Lu Qian Ren… The starting point was to write the story of Lu Qian Ren, as a credible historical story of the Chinese opera happening during the turbulent era from 304 to 439 known in history as the Period of Sixteen Kingdoms… On this picture, I try to make it like Gwan Yu, one of the most famous characters of the opera. Maybe that looks ridiculous but the wish to make it is stronger than the result itself. The result is and has to be obviously a failure, or it would just be some poor exoticism.