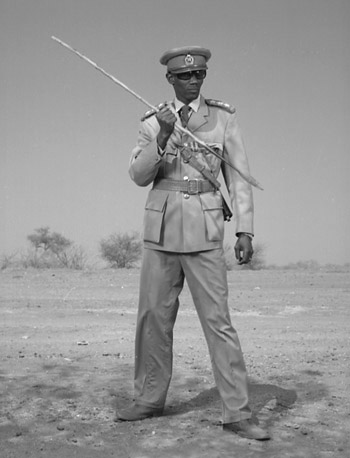 Online these next days, the “Hereros” series made in Namibia in August. The hereros and the himbas (series online soon too) are from the same population but separated during the colonisation by the German Empire. From that time, Hereros worked with the German while himbas and buchmen stayed in the nature. The hereros started to dress up like the Germans. In 1905, the herero population started to resist against the Germans and this finished by the sad battle of Wattenberg. After this, the Germans decided to get rid of the herero population, massively. All this finished by the first Genocide of the century. From around 200 000 people, only 15000 survived. 100 years later, the herero community organizes every year in Okahandja a festival, kind of tribal festival where a big part of the herero population is meeting for a large commemoration with tribal dance and tonnes of meat and alcohol. The most amazing part is the way they dress up, under this red flag, looking like German soldier, or sometime influenced by the Black Panther movement. It’s a kind of chaotic mix between the Amin Dada icons (and its Scottish-like army), black power, colonialisms and tribal uniforms.