twin sisters Helene and Estelle in the majorette Uniform 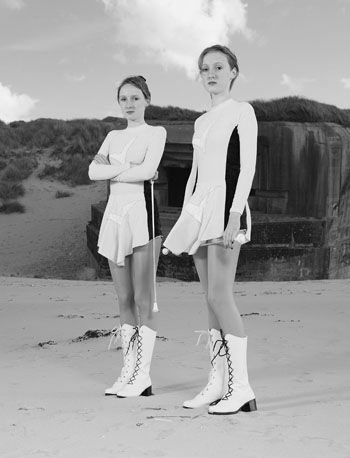 This is the portrait of the twin sisters Helene and Estelle in the majorette Uniform I designed for the film. They wear a yellow, black and white “lycra” outfit with two white birds on the front. In the film , they are supposed to take part of the “Antoinettes” group. Cinema is really a new experimentation field for me. We’ve been working on its preparation for almost two years already. And it will be a musical. It’s on its way. Sodaperaga, a french film producer is supporting the project. A team is already working on it. It’s the first time I really get inside a group, deciding to design a uniform, to create something using my photographic background as a documentation for my film. The “Bleus de travail” book, the “Majorettes, the “Steps”, the “Donneurs” books really helped me to define my scenario. And the “Matière grise” series is also a very important base for my story.