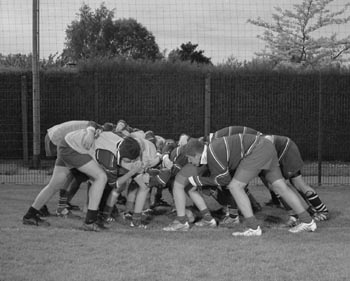 There’s a big common point between this image and the Double Nelson series about french wrestler… all these sports were bodies create together a unity, and once can find the same state of things in the way that a group of legionnaires are working together… In french, we talk about “un corps d’armée”… meaning that all the bodies together are finally only once, stronger and united. Still if it’s fake and somehow synthetic, this feeling do really exists. In the Double Nelson book, Bill Kowenhoven wrote: “The interaction of wrestlers’ bodies, their fused proximity and manoeuverings, seems to create a new species of thick-bodies, two headed quadrupeds”: This time, it’s 16.